Over the past three decades of work in education, I’ve seen technology projects that thrive in what might be seen as the least promising starting environments. By the same token, though, I’ve also seen projects that were well-funded and well supported, with excellent IT staff and solid technical professional development, come to a standstill, collapse, and fail. Bad luck can happen to any project, of course – but these projects did not fail for random causes. Rather, they all exhibited a key central pattern: in every instance, all (or nearly all) of the faculty used the technology nearly exclusively at the Substitution level of SAMR (i.e. where the new technology acts as a direct substitute for the old one, with no functional change) for the first two years of the project. In conversations with leadership at these schools, I heard the same refrain: faculty had been encouraged to stay with the simplest (i.e. S-level) uses of the technology in order to move forward carefully, and avoid mistakes or over-taxing the teaching and IT staff. In one such case, I was informed by the Head of School that they would “likely mostly stay at S for 5 years or thereabouts” because “their school was already doing very well” and they had heard me state in presentations that “there was nothing wrong with using technology at the S level.”

It is absolutely true that I have repeatedly emphasized the fact that there is nothing wrong with using technology at the S level – and, in fact, a strong base of S-level usage is required for many (probably most) Augmentation or higher-level undertakings. However, there’s a big difference between this and doing almost nothing but substitution for extended periods of time. The latter is invariably damaging to projects – but why? After all, given that S-level usage is associated with little to no change in learning outcomes, one could see why this type of slow adoption would not help improve things overall – but why would it actively harm them? To understand this outcome, we need to realize three very important things about Substitutive technology usage:

1. Not all S-Level uses are equivalent – some have a path leading to AMR from them, others not.
Many of the S-level uses encouraged in these cautious scenarios are dead ends as far as building upon them goes. In other words, these types of uses do not set the stage for anything to happen beyond them. For instance, consider the S-level use of online multiple choice tests to replace their paper counterparts for summative assessment. Absent any serious fine-grained learning analytics tools (sadly, truly hard to find), nothing builds upon this: the student takes the exam, then gets a grade, just as they did before, and nothing new can be built because of or on top of this.
By contrast, using the same toolset for in-class fast formative assessment (e.g. as in Eric Mazur’s ConcepTests1) sets the stage for technology use at the A level and beyond, with remarkable improvements in learning outcomes via peer discussion and peer instruction. As always when thinking about SAMR, the technology is only one piece of the puzzle – what happens with it is just as crucial.

2. When going from Substitution to Augmentation, the previous effectiveness of use (and/or understanding of the whys of that use) of the technology being replaced is crucial to the transition occurring.
At the A level, the new technology brings with it functional improvements that could not be accomplished with the old technology. However, if the old technology was deployed in such a way that some of its S-level features were misused or underused, then this may thwart the use of A-level features in the new technology. For instance, any good ebook or PDF reader has built into it annotation and highlighting features (S level – these are present in any paper book accompanied by a pencil and highlighter), as well as automated note summarization, gathering, review, and export features (A level – paper books can’t collate and export highlights and notes by themselves). However, in many schools students are forbidden from highlighting or annotating textbooks, since the books will be reused over multiple years. This should not pose a problem – it simply means that students will also need to learn to highlight/annotate when using ebooks – but in practice the previous state of things prevails, specially if it is perceived as having worked “well enough”. In the very worst cases, students wind up trying to improvise highlighting strategies that result in ebooks that are a sea of yellow text, and the automated review features of the ebook wind up doing more harm than good.
A second example is provided by note-taking apps: here, the A-level features (e.g. synchronized audio recording, embedded media/web links, social sharing/collaboration features) can all be rendered null and void if students lack good note-taking practices to begin with. If students have never been taught to do anything other than basic quasi-transcriptional note-taking with paper and pencil, then the S-level affordances of computer technology mean that they can do a more efficient job, but a less effective one, since they can type faster and have to give even less thought to what they are hearing/seeing than before.2 Again, this can be easily fixed by teaching students good note-taking techniques, whether on paper or digitally – but as in the previous example inertia has tended to prevail, with the coda that students are in some instances discouraged or prevented from using the technology for this purpose.3

Thus far, these two aspects of S-level practice might be seen as responsible for stasis, even stagnation – but not yet active collapse. To see why failure is more likely than not in an S-only project, we need to look at a third aspect:

3. The overall outcome of a set of S-level practices is a net zero (or very close to it) improvement in student outcomes. Some of these practices will have a slightly positive impact, while others will have a slightly negative impact – but the slightly negative outcomes will be perceived as weighing much more than the slightly positive ones, with the corresponding expected impact upon the survival of the project.
In 1991, economists Amos Tversky and Daniel Kahneman identified a curious consumer choice phenomenon that they termed loss aversion in riskless choice.4 Briefly, the substance of their discovery can be summarized as follows: given an initial starting state, consumers will weigh potential (or actual) losses much more heavily than equivalent gains. Anyone with a toddler can confirm their observation: receiving an unexpected ice cream cone will trigger squeals of joy at around a volume of 5 STDDS (Standard Toddler Delight/Disappointment Scale); accidentally dropping the cone will result in wails of anguish pegging the meter at around -10 STDDS.5
Now, take a look at this sample set of studies (from Tamim et al. (2015)6), with effect sizes categorized by SAMR level of technology use: 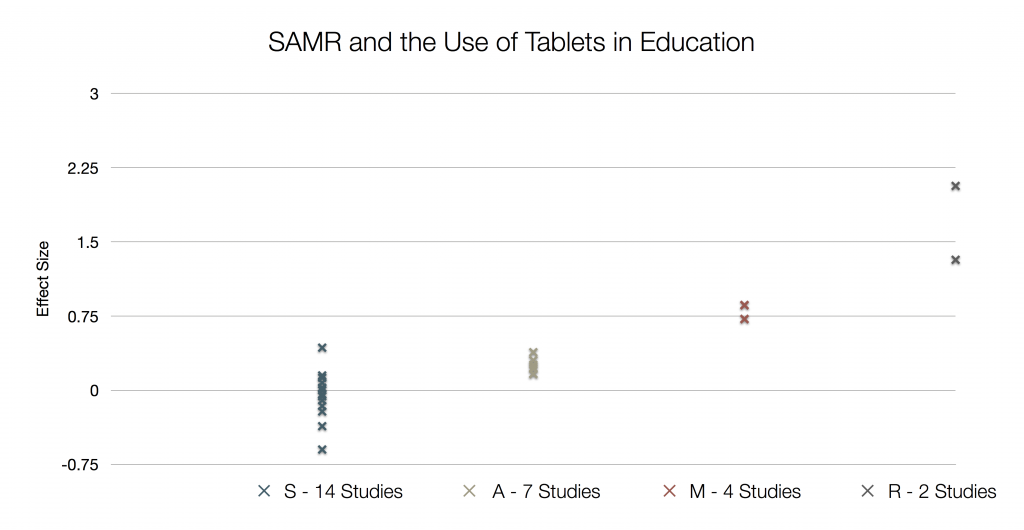 As you can see, the median for S-level use in these studies is very close to a zero effect size – we’ll analyze the effect sizes for AMR in a later chapter. However, while this is the reality of the situation, the cumulative perception is a very different thing: every (very slightly) negative outcome will be perceived as being up to twice as large as it actually is, and the perceived net result will be overall negative. Argue all you like with the perception – the bottom line is that your project is headed at this point to either a slowdown (which will only make matters worse) or the chopping block.

So, what is to be done? You could, of course, just say “make sure to not stay at S for too long”, and call it a day – but if things were that easy, I would not be writing this book. It is important to note that the school leadership and teachers that I have met over the years are neither thoughtless nor foolish – most of the schools I have seen fall into the “all S” prudence trap are staffed by genuinely caring and engaged individuals – but that makes their dilemma no less real. Because of this, over the past few years I have developed a particular approach to SAMR and its use in planning and implementing new technology uses in education that avoids this trap, and still manages to fit within the bounds of reasonable prudence. The approach is not prescriptive – many schools have been successful with very different modes of development and use of SAMR – but I believe it can provide useful food for thought at risk-taking and risk-avoiding institutions alike. The first stage in this approach is to develop a carefully selected core of shared practices among teaching staff – but before we look at how to do this, it will be useful to review SAMR and a second model, the EdTech Quintet. Which will be the subject of the next chapter.